Paterson history to the end of 1821 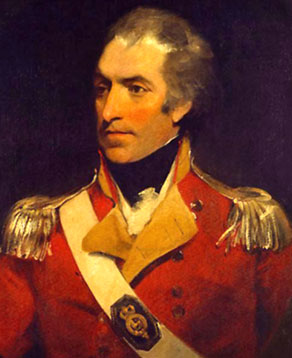 The Paterson area is the ancestral home of the Wonnarua and Worimi Aboriginal people. The first Europeans to visit the area were probably a few convicts who escaped from Sydney in the 1790s and lived with Aborigines at Port Stephens for several years, travelling through the lower Hunter Valley during their time at large.[1]

In June 1801 a survey party that included Francis Barrallier, Lieutenant-Colonel William Paterson and naturalist John Lewin explored and charted the Coal River (Newcastle).[2] During their survey they travelled up what are now named the Hunter and Williams Rivers. Barrallier returned in November 1801 to finish his survey, and travelled up what is now known as the Paterson River as far as Mt Breckin (about 3 or 4 kilometres north west of the current village of Vacy).[3]

One of William Paterson's camp sites during the 1801 expedition, by John Lewin.

In 1804, following the uprising at Castle Hill, a permanent settlement was established at Newcastle to house convicts who had re-offended in the colony. From that time, convict gangs from Newcastle began cutting timber on the Paterson River and they established a camp there at Old Banks.

In January 1812 Governor Lachlan Macquarie visited Newcastle and travelled about 30km up the Hunter River. At about this time, pehaps during his visit, he permitted five men to take up small farms on the Paterson River at Patersons Plains as a reward for procuring a special order of cedar logs.

Macquarie's decision was extraordinary and did not fall within official land settlement instructions from the British government. Small land grants to emancipated convicts had been official policy since Governor Phillip's time but four of the men to be settled at Patersons Plains were still serving convicts (three of them were pardoned later ... in 1821). Moreover they were to be settled without survey or regulated land boundaries, and they were not to receive legal title to their land.

The four convicts were Benjamin Davis, George Pell, John Reynolds and John Swan while the fifth person, John Tucker jnr, was born in the colony (initially Tucker settled on land allowed to his father). In 1813 the five were joined by the Surgeon at Newcastle, William Evans, who was permitted to take up 100 acres at Patersons Plains. Also see map.

George Pell drowned in 1815, reducing the number of Paterson River settlers to four (Evans still lived in Newcastle). In 1817 Governor Macquarie gave the Newcastle Commandant Captain James Wallis permission to increase the number to six. As a result Richard Binder and Robert Whitmore took up land on the river in 1818. Between then and the end of 1821 they were joined by Thomas Addison, Anthony Dwyer, John Reeves and John Powell.

The farms of these early settlers at Patersons Plains were small, typically around 30 or 40 acres, and the occupants did not own the land but held their farms at the pleasure of the government (with the exception of John Powell who was promised title from the outset).

The early European settlement at Patersons Plains shows the colony's penal system in action. For most of those who now lived in huts on small farms at Paterson River, this was the final stage of a personal saga that had started with transportation as a convict from Britain or Ireland, followed by a further court conviction in Sydney and a sentence of secondary transportation to the penal settlement at Newcastle. For these men, permission to settle at Patersons Plains was the reward for good behaviour, for diligently performing their diverse roles at the Newcastle penal settlement as timber cutters, superintendent of lime burners, ship salvage and other tasks.

For the convict women they married or partnered, it was the opportunity to escape lawfully via the altar or concubinage. In each case they met their partner at Newcastle. Robert Whitmore was sent to Newcastle for stealing the cargo of a boat he was skippering on the Hawkesbury, while his future wife Martha Greenwood was exiled to Newcastle for her insolent behaviour at the Parramatta female factory.

Young John Tucker's second wife Frances Turner was initially a convict nurse at Sydney Hospital who was sent to Newcastle after absenting herself from work for a month. John Swan's second wife Margaret McKennell was banished to Newcastle for receiving stolen goods in Sydney, and Anthony's Dwyer's future bride Margaret Cuddy for stealing a watch.

The fact that this band of convict and ex-convict men and women were allowed to settle at Patersons Plains is a tribute to the reformatory and humanitarian policies of the governor at the time, Lachlan Macquarie. He evidently took an ongoing interest in his initiative, as he visited the settlers at Patersons Plains in 1818, the remote location a remarkable inclusion in his itinerary.

One of the final settlers in this phase of Paterson River history was the Reverend George Middleton, the resident pastor at Newcastle who selected 400 acres of glebe land at Paterson in 1821 to support his pastoral activities at the penal settlement. His friend and later chief constable of Patersons Plains, Ralph Mills Clarke, lived in a hut on Middleton's Glebe from 1821.

By the end of 1821 the Hunter Valley was about to be surveyed and opened to large-scale settlement. The ex-convict settlers already occupying land at the governor's pleasure would struggle over many years to gain legal title to their land while the free men - Evans, Tucker and Powell – would have no problem. Their grants were increased to fit the pattern of survey.

Detailed sources are provided on the pages linked to this page.